100 years ago this week, a terrible accident occurred when the Valbanera, a steam ship taking migrants from Spain to the Americas, sank in a hurricane with the loss of nearly 500 lives, between Florida and it’s destination, Cuba.

The population of the Canaries were badly affected, as more than half of the passengers had boarded the Valbanera in either Las Palmas or Tenerife. Many families lost sons and daughters. The dreams of a new life in the Americas turned into despair for many in September 1919. It has been described as “Spain’s Titanic” . 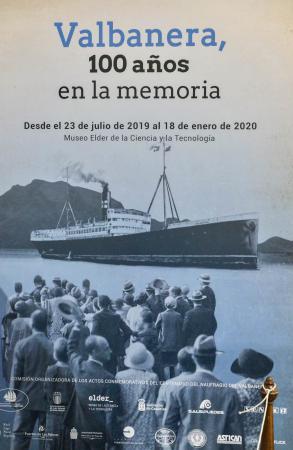 This year marks the 100th anniversary of the tragedy, and the Museo Elder in Las Palmas has held a series of events to remember the losses. Eduardo Vera, our lead diver and Instructor has been involved in some of these events, as he led a special expedition to the wreck in 1993.

The Tragedy of September 1919

The Valbanera was originally built in Glasgow in 1905 for the Pinillios line. It was 399 ft long and could carry nearly 1000 passenegers in 3 classes. By 1919 it had already crossed the Atlantic many times taking Spaniards to the New World.

It left Las Palmas in the middle of August 1919 and arrived at Santiago in the south-east of Cuba on the 6th September. When it arrived many of the passengers left ship, despite having paid to go to Havana. Some said that the conditions on board were very bad, some that the crossing had been rough, and more bad weather was forecast. These passengers continued the journey to Havana by land and escaped the mysterious tragedy that was about to happen.

Two days later the area was hit by an early hurricane, and during this frightening and uncontrolable storm , the Valbanera was blown onto the ‘Dry Tortugas’ shoals, near the Florida Keys, where it sank.

A major search was started as soon as the hurricane passed, but it took another ten days to locate the ship, which was found in an area of quicksands, 40 miles South of Key West, in water just 30 feet (10 metres) deep.

The ship was found with all the doors closed, all the windows and portholes shut, and all the lifeboats still on their davits. The Captain must have closed the ship down to weather the hurricane but in turn this trapped the estimated 488 passengers and crew inside. No survivors or bodies were ever found, so the final hours of the Valbanera will forever remain a mystery.

One group however did survive, and that was the group that left the boat in Santiago and made their way overland to Havana, or settled in the South of Cuba. Juan de la Gru Gonzalez Ponce was one of these. Born in 1899 in Gran Canaria he had already crossed the Atlantic once in 1915 when he was 16 years old, and had worked for two years cutting sugar cane on a farm. He decided to leave the ship in Santiago, and after the tragedy spent another four years working on the farms in Cuba. By 1921 he had saved enough money to return to Gran Canaria, and to buy a small Finca (farm) near Cardonnes in the Arucas district which grew bananas. Two years later he married, and they lived in this house and one in Las Pallmas till he passed away in 1980, one month before his 81st birthday. This was the story of Eduardo Vera’s Grandfather.

The Archaeological Expedition of 1996

In an attempt to find out more information about the wreck, and to verify the reports from seventy-three years earlier, the journalist Fernando J García persuaded the Archivo de los Indianos in Asturias to fund an expedition to the wreck.

Eduardo Vera was chosen as the lead Spanish diver as at that time he was one of the most respected divers in Gran Canaria, and had a personal connection with the wreck, as his grandfather was one of the group that left the wreck in Santiago, and made his way by land to Havana.

The group arrived in Key West, Florida in Febuary 1996, and carried out a series of dives on the Valbanera. Seventy-six years after the sinking, the ship had submerged into the sands, canting to the starboard side. They were able to confirm that the majority of the doors and port-holes were still closed, and spent about 8 hours over several dives exploring parts of the interior of the vessel. Diving in February it was during the coldest month for diving in that area.

This year has seen a series of commemorative acts based around the Museo Elder in Las Palmas, where the conditions inside the boat for emigrants have been recreated. Eduardo has been explaining how his team explored the remains of the Valbanera in 1996 and the conditions they encountered in several live events, and TV and press interviews. The exhibition runs till the end of this year. In addition a new book is due to be published in November which has all the details of this tragedy.

Historians always say that when you understand all the facts, we should see what we can learn from an event. Once again in 2019, a hurricane has taken the lives of many defenceless and poor people, only a few hundred miles from where the Valbanera lies today. One hundred years later the weather is still uncontrollable. People are still losing their lives as they are unable to get out of the path of a devastating storm, despite better prediction and monitoring.

And underlying the tragedy is another theme still on the agenda today … the trans-global migration of people trying to find a better life ‘somewhere else’. Is the fact that they bought tickets from a major shipping line so different from those who pay people smugglers today to follow new and more challenging migration routes?

This week Eduardo has been involved in several events and interviews related to the Centenary celebrations, including a TV Interview on TV Canarias. After that he will settle back into his normal rhythm, showing our guests at Davy Jones Diving his favourite dive site in Gran Canaria, the El Cabrón Marine Reserve.

Author – Brian Goldthorpe is a BSAC Advanced Instructor and a PADI Master Scuba Diver Trainer with ‘Elite’ status. He has been diving in the Canary Islands since 2002 where he runs a diving centre in Gran Canaria – Davy Jones Diving , where in between his Radio, TV and Press appearances Eduardo also shows guests around the El Cabrón Marine Reserve.