The ‘Vara de Pescao’ is the main event that happens in Arinaga at the end of August each year. It started many years ago as a celebration of the traditional fishing crafts in the town, but has now become one of the biggest parties on the island with up to 40,000 people joining the event. 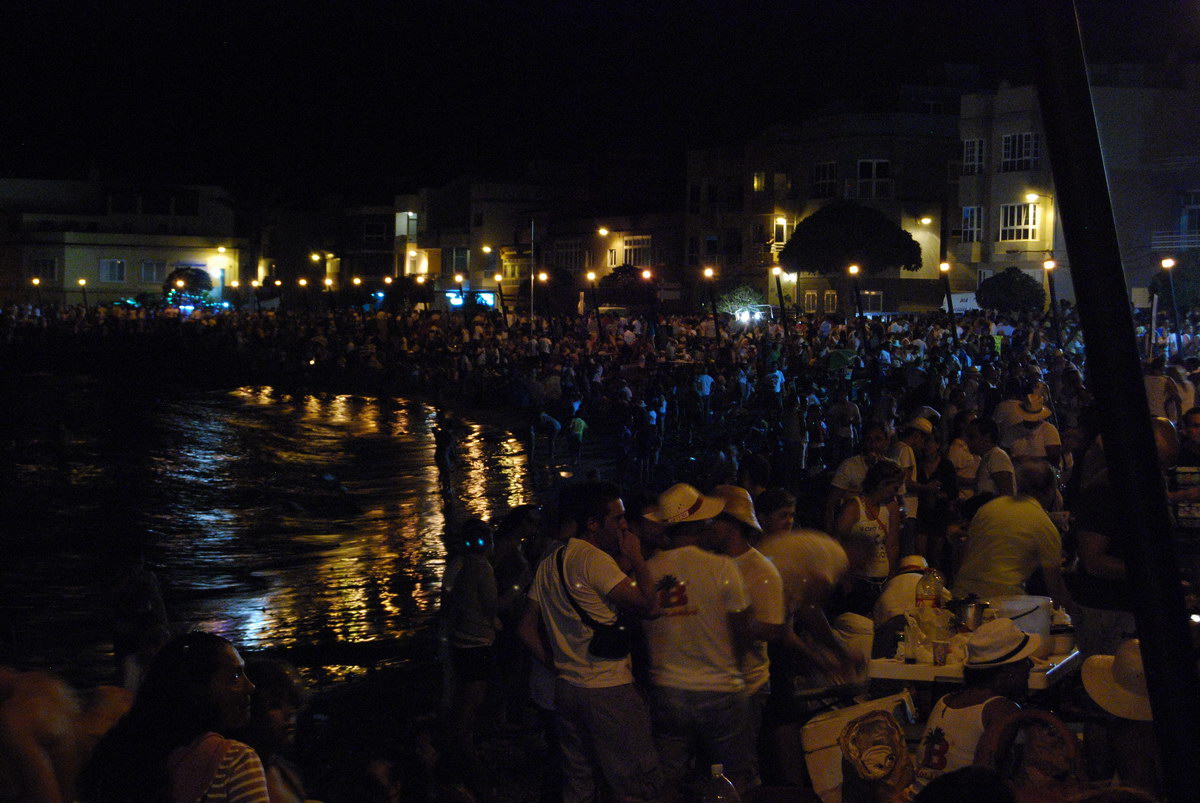 The event happens on the last Friday of August each year, so this year (2019) it is on Friday 30th. There is an unofficial ‘dress code’ … the white shirt and blue jeans or trousers that the fishermen of Arinaga wore along with a straw hat! The literal translation is ‘the landing of the fish’.

It starts around mid afternoon with groups arriving in Arinaga, finding a place for a picnic, and by about 5.00pm the town is full of locals greeting each other and strolling around. At 6.00pm there is a ceremonial ‘landing of the sardines’ then at 7.00 a small procession of ‘boats’ make a procession along the Aveneida from Risco Verde, dispensing freshly cooked sardines. 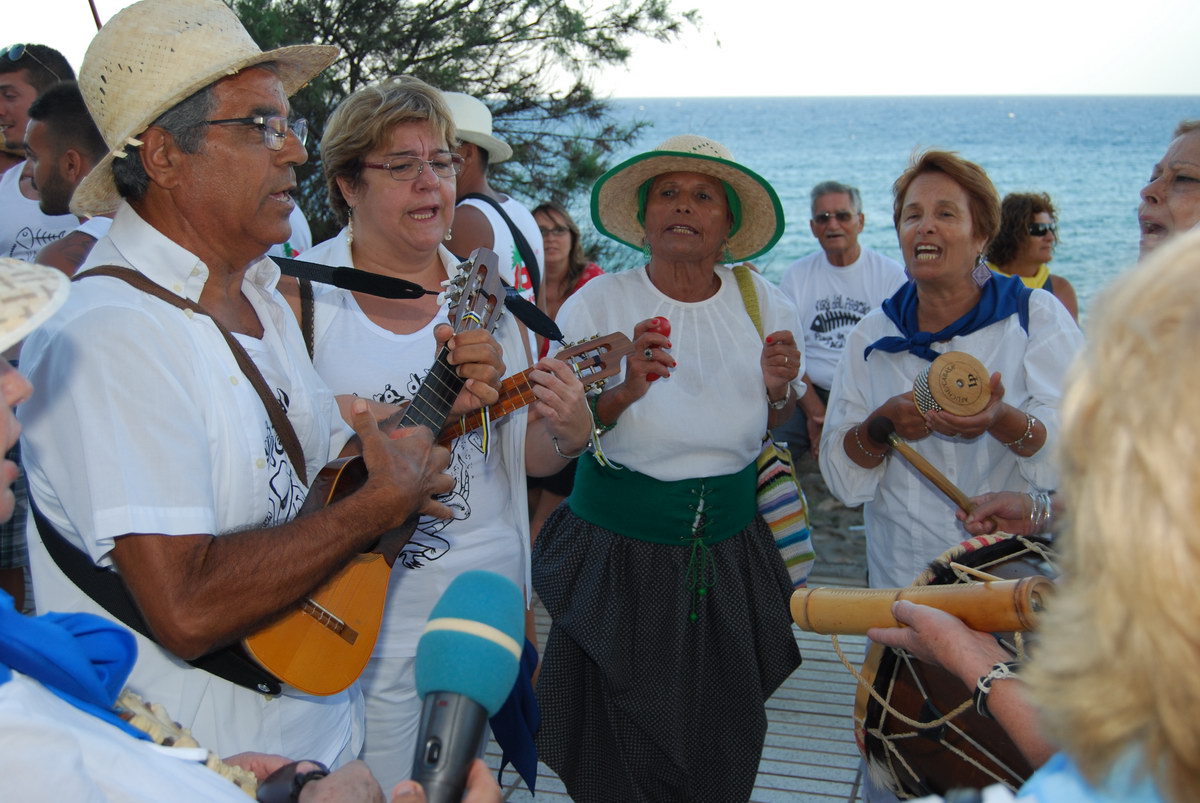 There will be people in local traditional dress, live music groups playing traditional songs, percussion groups pounding out their rhythmic beat and two DJ’s and a marching band. You get a real feel for the ‘community’ and may come across farmers with their animals as well as women carrying the fish in baskets on their head in the traditional style.

The finale is the firework display at about 11.15, over the bay of Arinaga. Be there a bit early to get a good place to watch. Because this is done over water you get a great view from anywhere along the promenade, and the show includes fireworks on the surface and spectacular reflections in the sea. 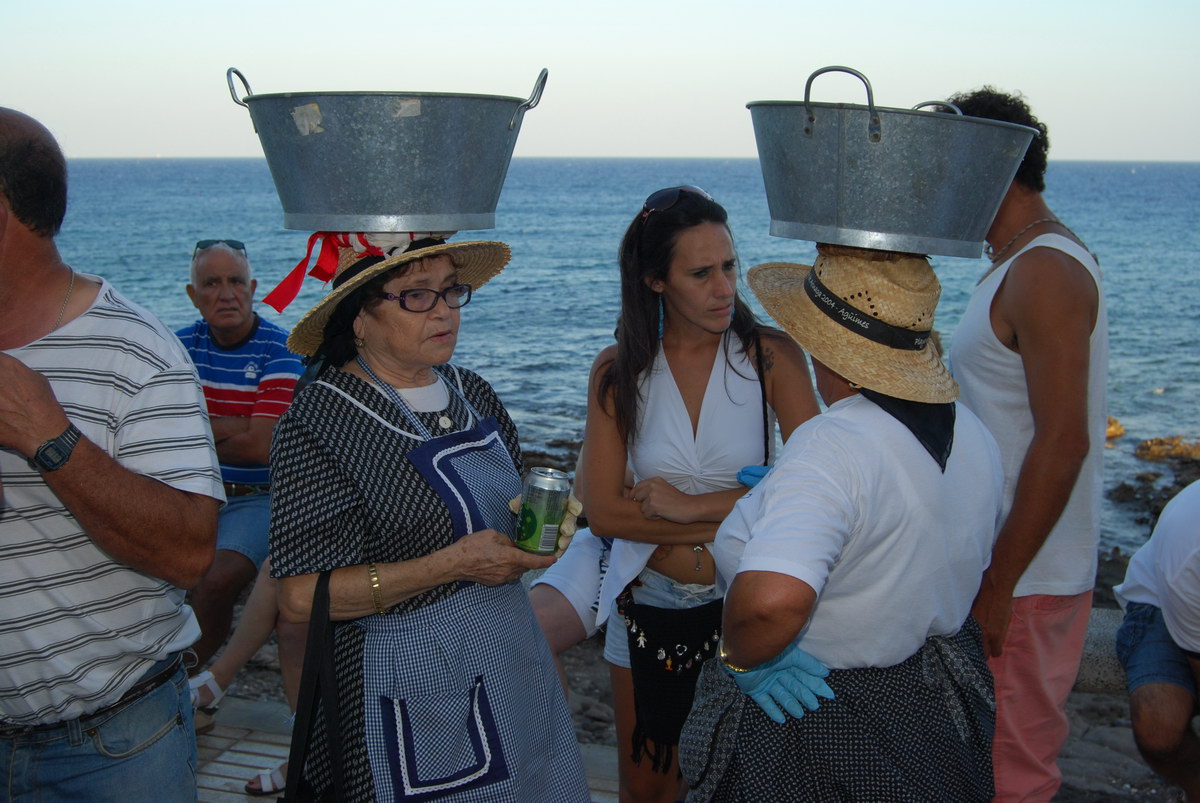 If you want to come and see the fiesta, then it is a ‘free’ event, but get here early to find a spot to park (follow the signs for local parking), and when you leave, expect to be breathalysed as the Guardia Civil impose a 100% testing policy! Remember .. blue trousers and white shirt to feel part of the event.

During the event, all the restaurants on the Aveneida close for normal meals and just offer a bar and take-away sandwiches. Away from the main areas you can still get food earlier in the evening. The first year that I lived here (2002), I was in the process of taking over my diving centre in Gran Canaria, and we found a small backstreet restaurant (Bar el Tomate), but every time they started the sound systems they blew the power for half the town and we had to have the meal by candlelight! Today the event is much better managed and power cuts are much less frequent here.

So don’t miss this once-a-year event where you can see our sleepy little town transform into the biggest party on Gran Canaria for just one day.

Yes of course you can dive in the Canaries!  There is no reason to be worried about planning a diving holiday during the BREXIT uncertainty.

Since the original exit date at the end March evaporated, the most likely outcome as we write(!) is a ‘dis-orderly departure’ of the United Kingdom from the EU, which will have almost no impact on the millions of holidaymakers who visit Spain from the UK every year.

For visitors to the Canary Islands from other parts of the EU we do not foresee any disruption, so these hints and tips are mainly for travellers from the United Kingdom .

Firstly, there seems to be a raft of ‘misinformation’ and scare stories, so I have tackled here some questions we have heard from guests who want to go diving in Gran Canaria. There are still many divers who want to come out from the UK to get a break, in the sun, especially in Autumn and Winter when most of the Mediterranean Resorts are closed.

Much of this advice is based on authoritative reports, but also on the experiences of customers during the ‘Ash Cloud’ crisis in 2010, when planes stopped flying.

I hope this will cut through the FUD (Fear, Uncertainty and Doubt), so you can travel happy and enjoy your diving in Gran Canaria and the other Canary Islands this year.

What happened during the Ash Cloud?

In April 2010, the eruption of a volcano in Iceland created the highest level of air traffic disruption since the second world war.  Many fears have been published that a ‘no-deal’ BREXIT could also leave pilots and planes without permission to fly, stranding British holidaymakers throughout Europe.

But when that happened in 2010, all the Tour Operators, such as TUI, Thomas Cook stepped up to the plate and arranged continued stays in hotels, and looked after their customers, taking some back home in chartered  cruise ships or by land.

So our first tip, is if you are worried about ‘being stranded’ by a sudden no-deal Brexit, book a package holiday with a major tour operator, in one of the bigger hotels.  They will then be there to help you and to make sure that any travel disruption is minimised, and at no extra cost.

And the ‘official position’ is that in March 2019 the EU and the UK agreed a reciprocal 12-month airspace access period in the event of no-deal, when “ for the 12-month period the UK intended to grant EU air carriers a level of access to the UK at least equivalent to the rights that would be granted to UK airlines under the EU’s regulation.“This includes traffic rights, ownership and control, leasing of aircraft, cooperative marketing arrangements and fair competition,” the transport department said.“.

So even with a worst case of a no-deal BREXIT, UK flights will still come to the Canaries, and European carriers can still fly in and out of the UK.

Do I need an International Diving Licence to dive after BREXIT?

Yes, this is in fact true … but you need one today, and you already have one!

The majority of recreational diving qualifications are NOT controlled by either the EU, or by national governments.  Your PADI, CMAS, NAUI or BSAC qualification has been issued by an independent body, and all have been approved as meeting the International Standard ISO 24801-2.

We will accept any diver with a valid ISO qualification here to dive, in all cases (No-Brexit, No-Deal, transition period  or Smooth exit).  I am sure that other dive centres in Spain will be the same.
So our second tip is that if you are  worried that your PADI card does not specify this standard (or you have lost the card), then you can get a replacement card for about €45.00, or why not do that PADI Advanced or Speciality course you were thinking of, and get a new card which shows the ISO compatibility.

Can I still use my EHIC card for medical treatment during any transition period?

The answer here is more of a ‘yes and no’.  The European Health Insurance Card does cover basic medical costs when in Europe, but importantly, in Spain and some other countries it DOES NOT COVER HYPERBARIC TREATMENT.  In Spain the law requires all divers to have both diving medical insurance and ‘Responsibilidad Civil’, neither of which are covered by the EHIC card.

Over the last few years I have seen more and more visitors travelling without any form of travel Insurance, and I have also heard about visitors who have had a (non-diving) accident, been treated free, but then had extra costs to pay for new flights or changes to hotels, all of which are normally covered by a good travel insurance policy.

Remember also that the EHIC card only covers treatment in the Spanish National Health service, where they do not always speak English, while if you have a travel insurance, you will be treated in a private clinic where there are more language experts.

So tip 3 is that both before and after any BREXIT, you should have a good travel Insurance policy, which covers diving, and in the event of any unfortunate accident such as a broken leg, you not only get good medical treatment, but great support from your insurer to get home without any extra problems.

Yes, I know insurance is boring and sensible, but there are plenty of good annual multi-trip policies available, including from diving specialists such as DAN and Divemaster Insurance, which will give you a comprehensive cover for a whole year at a good price.   If you just want to ‘top-up’ your cover for diving here we have daily, weekly ,monthly and annual policies available which cover any diving issues in Spain.

So to summarise my three tips, book a package of flight and hotel to somewhere familiar, where you have been before, and where the family will all feel comfortable.
Check that you have your PADI card or equivalent before travelling, and double check that your travel insurance covers all the activities you want to enjoy on holiday, including Scuba Diving.
If you book your package to Gran Canaria (tip no 4?) then send me a message, let me know you are coming and I can arrange some dives in the El Cabrón Marine Reserve for you.